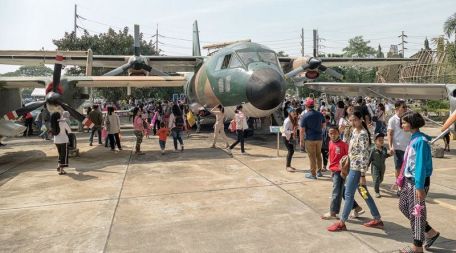 The Italian Alenia G.222 medium-lift tactical transport was born from a 1962 NATO requirement for a Vertical / Short Take-Off and Landing (V/STOL) tactical transport intended to supply frontline forces in the event of all-out war in Europe with the Soviet Union during the Cold War. The Fiat concern developed a submission in response and, though not selected for procurement by NATO, the Italian Air Force saw enough potential in the type to order a pair of prototypes. The V/STOL requirement was ultimately dropped from the Italian requirement and the airframe was envisioned to undertake the roles of basic transport and anti-submarine warfare. Fiat envisioned a civil-minded variant as well though this later came to naught. The prototypes were ordered in 1968 and work commenced thereafter. The original NATO V/STOL requirement eventually went unfulfilled.

After some delay, first flight of the G.222 was recorded on July 18th, 1970. Early trials proved the design sound and production-quality aircraft were on order through Aeritalia (having now absorbed Fiat Aviazone). 44 examples were ordered and these would largely resemble the working prototypes with the exception of pressurization for higher-altitude service. Several Italian aviation firms would be called upon for assembly of the various major components making up the aircraft as a whole. These would include Aermacchi and Piaggio for the wings (outer and inner sections respectively) and SIAI-Marchetti for the empennage. The standard powerplant of choice became the American General Electric T-64-GE-P4D series turboprop, each installation driving a three-bladed propeller.

The Italians had developed a strong-performing and capable transport with high shoulder-mounted wings, an elevated empennage and tubular fuselage. The high-mounted wings allowed for excellent ground clearance of the spinning propeller blades while the elevated tail unit gave clear access to the rear-set loading ramp for cargo insertion/extraction (thusly the engines could be kept running while cargo was being managed by ground personnel). The tubular fuselage enabled a useful cargo hold load while also incorporating the flight deck and streamlined aerodynamic qualities. The G.222 concept largely resembled the tried and proven Lockheed C-130 Hercules. The G.222's overall design allowed for excellent short-field performance, a key requirement of the Italian Air Force, and this was further assisted by low-pressure tires and applicable suspension for rough-field operations. The rounded cockpit windscreen and short nose assembly offered up excellent visibility out of the cockpit for the flight crew pilots.

The first Italian Air Force G.222 flew on December 23rd, 1975 though it was not until April of 1978 that serial deliveries actually began, these replacing the aged line of Fairchild C-119 cargo aircraft then in use. From then on, the product piqued the interest of several foreign parties including Argentina, Nigeria, Somalia, Venezuela, Thailand and the United Arab Emirates to which came modest sales abroad. A 1977 sale of 20 G.222 aircraft to Libya was stopped by the United States due to its use of the General Electric T-64 turboprops forcing these marks to be refitted with Rolls-Royce Tyne engines instead. At least 10 G.222s were adopted by the United States military as the C-27A "Spartan" with modifications completed by Chrysler Aerospace. A modernized version of this aircraft then became the C-27J of 1996 and incorporated the digital cockpit and engines of the Lockheed C-130J "Super Hercules". The Spartan was used by both the United States Air Force and United States Army and several A-models were eventually passed on to the Afghanistan Air Force following the US-led invasion. Modernization of Italian Air Force G.222s was undertaken in 1996.

The G.222 has since been marketed in several major variants. The G.222TCM represented the original pair of prototypes while the G.222A was the basic transport variant. The G.222RM was a specialized platform for radio and radar calibration while the G.222SAA became a modified fire-fighting vehicle of which four were produced. The G.222T represented the aforementioned Libyan-bound G.222s with Rolls-Royce Tyne engines. An Electronic CounterMeasures platform was born in the G.222VS (or G.222GE) of which only two were delivered. The C-27A "Spartan" were the 10 exampled delivered to, and modified by, the US military of which some have since passed on to the rebuilding Afghanistan Air Force beginning in 2002. Argentina G.222s were utilized in the Falklands War with Great Britain. Italian Air Force G.222s served in the humanitarian role during United Nations intervention in Bosnia-Herzegovina.

Production of G.222s spanned from 1970 to 1993 to which some 111 examples were completed. The G.222 has since been retired from Italian Air Force service with the largest global operator being Afghanistan which manages at least 14 C-27A models today. Argentina, the UAE, Libya, Somalia, Thailand, the United States and Venezuela also no longer make use of the G.222 in a military role. The US Department of State does, however, operate four ex-USAF C-27As in the counter-narcotics role out of Patrick AFB in Florida.

The G.222 largely exists today as the C-27J "Spartan" which began production in 1997 and is currently set to be delivered to a handful of awaiting air forces around the globe (including Australia, Italy, Greece and Mexico). The USAF manages at least 8 of this aircraft type while the ANG (Air National Guard) operates 13.