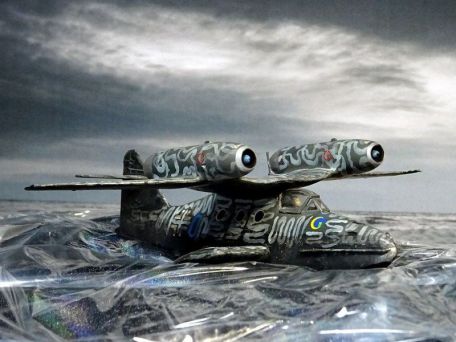 World War 2 (1939-1945) required an equal victory over the sea as it did over land, particularly for nations dependent on free access to critical ocean spaces of the world - nations such as the United States, Britain, and the Empire of Japan. In response to this need, a slew of floatplane and flying boat aircraft were fielded during the grand conflict and these designs ranged from prewar offerings to all-new developments. As the fighting raged on in the Pacific, the United States Navy (USN) looked to strengthen its stock of serviceable reconnaissance-minded floatplanes. One endeavor produced the Curtiss SC "Seahawk" of which 577 were ultimately built. First flight of the type was recorded on February 16th, 1944 with service introduction following that same year. It served into the post-war years and was not retired until 1949.

As early as 1942 the prospect of a new floatplane was in the works for the USN. America had been at war since the events of Pearl Harbor back in December of 1941 and reinforcement of all branches of service was now the call of the day. Preliminary interest led to the USN contracting Curtiss Aeroplane to develop a pair of prototypes based on a new floatplane design submission. The contract was signed on August 25th, 1942, less than a month after the company had submitted their proposal and this also included an order for several service test aircraft to evaluate the viability of the new airplane under service conditions.

Getting its start back in 1942, the XSC-1 product gestated for a lengthy period by wartime standards for it was not until October of 1944 that the series was officially in active service. They were formally designated as SC-1 "Seahawk" and were delivered with fixed wheeled undercarriages before having their standard floatation gear added upon arrival. First examples were delivered to the USS Guam, an Alaska-class cruiser commissioned in September of that same year.

In practice, Seahawks proved excellent floatplanes for naval military service and came to be highly regarded in their field of expertise. However, its protracted development period limited its availability during much of the war, its first notable actions not occurring until June of 1945. By this time, the war in Europe had ended and Japan would capitulate a few months later, bringing a formal end to the war.

Beyond the SC-1 production model there existed the proposed SC-2 - a version featuring a second crewman with appropriately revised cockpit and canopy. This version was not acted on despite some nine prototypes being commissioned.