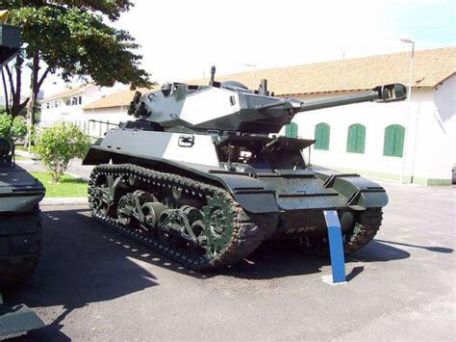 The Brazilian government purchased a stock of American-made, three-man M3A3 and M3A5 model Stuart Light Tanks during the post-World War 2 military drawdown. As roughly 25,000 of the M3, and its related kin the M5, were produced, it was only natural that its availability was high in the post-war years and secured by as many as 40 nations. The government's procurement numbered about 350 vehicles and these served as long as possible before their age and battlefield capabilities forces the Army to reevaluate the Stuart's effectiveness going forward.

During the 1970s, the local concern of Bernardini enacted a series of upgrades at the behest of the Army, the hope being that modifications to the existing platform could spell renewed life for the Stuart line. This produced the "X1A" initiative which spawned three notable design forms - though only two seeing notable production.

The original model was the X1A and was based on the M3A1 Stewart production mark. Appearing in 1973, this vehicle included a Saab-Scania diesel-fueled engine of 280 horsepower and its upper hull section was revised for a better internal working space while the suspension system proved completely new. A modern Fire Control System (FCS) aided the new French-originated 90mm DEFA CM90 Mk 3 cannon which was installed in an all-new turret. The main gun fired HEAT ("High-Explosive, Anti-Tank"), HESH ("High-Explosive, Squad Head"), and APFSDS ("Armor-Piercing, Fin-Stabilized, Discarding Sabot") projectiles. Eighty examples of this tank standard were modified and adopted for service.

The next X1A model became X1A1, a proposed improved form that never reached the production stage. Its suspension system was slightly revised and an additional bogie unit was added while the track idler moved some. While not formally adopted for service, work on this product paved the way for the X1A2 form that followed.

The X1A2, based largely on the improved X1A1, was more or less a completely new tank system when compared to the original American Stuart design. Three bogies were once again featured in the running gear as was a front-mounted drive sprocket and rear track idler. Overall weight reached 19 tons (short). The hull was of an all-new design and drive power came from a Saab-Scania diesel engine of 300 horsepower. Again a French 90mm main gun was fitted in the modern turret. Some thirty of this standard were produced from the period spanning 1979 to 1983.

The XIA series was used as long as possible before their 1940s era roots got the best of them. They were eventually given up for more modern solutions in the decades following.

The Avibras X-40 tracked, self-propelled rocket launcher used the chassis of the X1A1 Light Tank. This vehicle is detailed elsewhere on this site.