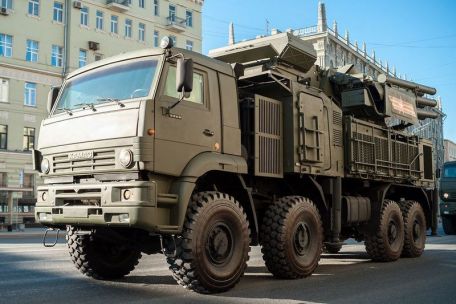 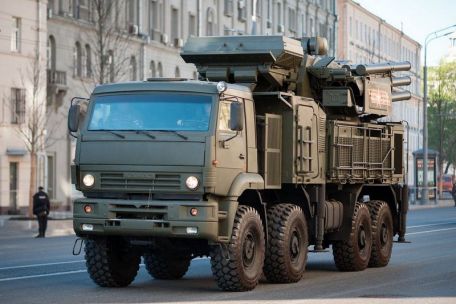 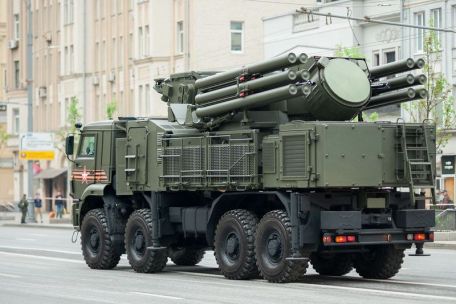 With ever-increasing capabilities being found in existing and next generation aircraft comes a desperate need for armies of the world to develop evolved air defense solutions. Such is the case with the Russian-originated "Pantsir-1", known to NATO as the "SA-22 Greyhound", a short- / medium-ranged, 8x8 wheeled, Self-Propelled (SP) Surface-to-Air Missile (SAM) system. The weapon system has been in active service (albeit in limited numbers) since 2003 and currently serves the Russian Army through over twenty examples as well as the army of Syria (a long-time Soviet customer). Furthermore, Algeria, Iraq, Jordan and the UAE are reported to have Pantsir-1 vehicles on order while Brazil is mentioned as a possible Pantsir-1 candidate in the near future. A naval version of the Pantsir-1 is also planned with the end-goal to equip various Russian naval destroyer warships and similar vessels with the potent defense product.

The Pantsir-1 is the actual surface-to-air component comprised of repeat-fire autocannons, a battery of missile launch tubes and an advanced integrated radar tracking/direction system. This component can, therefore, be affixed upon various chassis types including both wheeled and tracked as well as aforementioned warships. The wheeled version seen is a four-axle, 8x8 truck arrangement which an enclosed driving cab and attached operations cabin for the launch crew. The launcher component sits at the rear of the truck with an unfettered view of the action around the vehicle. The alternative identified form is a tracked offering with the launcher component affixed to the hull of a GM-352 vehicle. Development of the Pantsir-1 system began in 1990 as a replacement for the aging, though effective, "Tunguska" series anti-aircraft platforms.

Work on a new air defense system culminated in a pilot vehicle (this on a Ural-5325 8x8 truck chassis) being unveiled in 1994. A more finalized version was showcased to potential customers during the 1995 MAKS show. However, lack of government funding slowed and ultimately shelved the project for a time until backers in the UAE provided the necessary capital to see the program through some five years later. The production model was then seen on the chassis of a KAMAZ-6560 8x8 truck and UAE Army versions were built atop the chassis of the MAN SZ 45 8x8 truck - showing the high adaptability of the Pantsir-1 system.

The Pantsir-1 is an all-modern, all-digital air defense weapon system coupling advanced tracking, search and engagement functionality to a hybrid cannon/missile armament to achieve high "first-kill" probability at short-to-medium ranges. Fixed upon the chassis of a mover vehicle, the Pantsir-1 becomes a capable mobile air defense platform ready to counter the challenges of the modern battlefield. The primary weapon system is the collection of 12 x 57E6 series radio-guided surface-to-air missiles held in four separate, three-tube launchers. The missile component is tied to 2 x 30mm 2A38M autocannons that fire can variable warhead types to suit the given defensive role. This "one-two" punch ensures a high kill probability against all manner of low-flying aircraft including fixed-wing, helicopters and cruise missile types. Fire control is directed by two phased-array, 360-degree coverage radar systems that reach out to detect at 36 kilometers while engagement can occur under 28 kilometers. The total vehicle crew is just three personnel - a driver for the vehicle and two system specialists for the launcher/guns.

First combat use of the Pantsir-1 was through the Syrian Army when a system tracked and successfully downed an encroaching Turkish McDonnell Douglas RF-4E Phantom II reconnaissance aircraft in June of 2012. Beyond that, the exposure of the Pantsir-1 has been limited to due limited availability. That should drastically change with the number of systems currently on order - which may number as many as 250 units.

Iraq has received some Pantsir-S1 systems as part of a 48-strong deal with Russia signed in October of 2012.