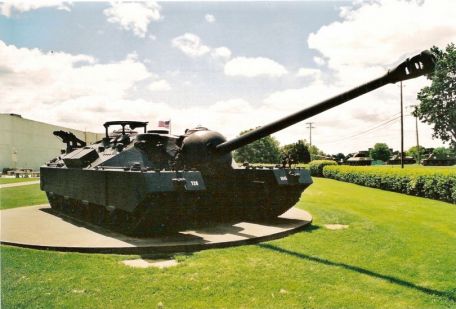 The T28 heavy tank was the largest tank ever developed for the US Military. Built in 1945 to counter the new generation of German heavy tanks, the end of the war in Europe ensured that only two prototypes would ever be built of the twenty-five that were originally planned (with at least five prototypes preceding production). American warplanners believed their T28 would be called upon to break through whatever stout German defenses were concentrated at the famed "Siegfried Line" in the European Theater and would be a primary armored spearhead in the inevitable invasion of the Japanese mainland in the Pacific Theater. Design and manufacture of the T28 was handled by the Pacific Car and Foundry - primarily makers of heavy trucks - with a T23 superstructure being used to save time.

The T-28 wielded a main gun armament consisted of a 105mm T5E1. This was supplemented by an anti-personnel 0.50 caliber Browning M2 heavy machine gun fitted above the crew hatch as a secondary weapon. The 105mm main gun fielded a muzzle velocity of 3,700 feet per second (1,130 m/s) with a range of up to 12 miles (19 km). The T28 tank had only a few differentiating qualities from past and contemporary American tank designs. For example, crew accommodations amounted to four personnel instead of the usual five. But perhaps the most interesting of these qualities was the lack of a traversing turret for the main gun, the gun instead traversing from its hull-mounted position and limited to 10 degrees right and 11 degrees left. Elevation was from a maximum of 19.5 degrees to minimum of -5 degrees. This limitation, coupled with the low-profile casement-type hull, meant that the tank was expected to concentrate its firepower against forward-placed targets or areas. It was the lack of a 360-degree traversing turret - common to conventional tanks even today - that categorized the T-28 more as a "self-propelled gun motor carriage" and not a tank proper. In 1945, the T28 was redesignated as such to become the "T95 Gun Motor Carriage". However, in 1946, the T95 was redesignated yet again to become the "Super Heavy Tank T28".

The T28 hull measured in at 11.10 meters long and was 4.39 meters wide with a height of 2.84 meters. Its total weight, when fully equipped, would have reached 95 tons. The armor was massive compared to other tanks of the day - 12 inches at her thickest. The lower front hull alone was covered by 5.25 inches (130mm) of armor while the sides totaled up to 2.5 inches (64mm) in thickness. The suspension area itself was allocated 4.0 inches (100mm) of protection. The armor of the T28 would have been powerful enough to deflect the fabled 88mm projectile round used by German heavy tanks such as the Tiger II. However, the developmental German "Maus" super heavy tank was being fitted with a combination arrangement consisting of a 128mm main gun and a 75mm secondary main gun.

As the T28s maximum field load was listed at 95 Short Tons, four individual sets of tracks were required to spread the weight of the vehicle over different soil types (in comparison, conventional tanks used one set of tracks). Each set was 12.9 inches (328mm) wide. When running on paved roads, the outer two tracks could be removed and actually towed behind the tank itself if an Army support truck was not available. The engine was underpowered for the listed weight ratio and consisted of a gasoline-fueled, Ford GAF V-8 series powerplant delivering up to 500 horsepower. However, field tests gave the T28 a top speed of only 8 mph (13 km/h), making her something of a liability by any regard. Conversely, the war-winning M4 Sherman could reach road speeds of 25- to 30-miles per hour. The T28, therefore, would have had trouble keeping up with a mobile mechanized front - considering she was to be used as the spearhead of such an action. As such, her actual battlefield usability was obviously doubted as the project progressed but this was world war and solutions were nonetheless needed.

The two T28 prototypes underwent evaluation at the Aberdeen Proving Grounds in Maryland and at the Fort Knox, Kentucky facilities up until about 1947. One of the prototype T28s was damaged by an engine fire during additional trials at the Yuma Proving Grounds in Arizona and was scrapped as a result. Needless to say, the T28 would never see operational service with the American Army. The major problem ultimately became the engine, this being very underpowered for the vehicle's operating weight and, while directly limiting basic performance specifications, serving to limit the T28's obstacle-climbing capability - a must-have quality for any tank of note since the days of World War 1. Consider that the vehicle's weight was also over the maximum limit of portable and structural bridges of the day - particularly the many old bridges across Europe - and the T28 never truly held any realistic advantage. The end of World War 2 more or less sealed the fate of "mega-tank" projects like the T28 and the German "Maus", the latter facing similar limitations.

The later stages of the T28 heavy tank development turned to the T29 and T30 heavy tank designs - these two developments being "true" turreted tank designs. The T29 mounted the same cannon as the T28 with less armor and more machine guns while the T30 was to use a larger-caliber gun (155mm L/40) with a more powerful engine (a Continental AV1790-3 air-cooled gasoline engine displacing 704 horsepower). These further developments closed the T28 program for good sometime in October of 1947. The 70-ton T29 went on to see trials but was never contracted for production. Similarly, the 72.5-ton T30 was never to see the light of day.

In 1974, the second T28 prototype was found rusting in the outdoor environment in a field at Fort Belvoir, Virginia. As the only remaining example of a T-28 tank, she was reconstituted to optimal display condition and put on display, calling the Patton Museum in Kentucky her home for many years following. As of this writing, this surviving T28/T95 is in the process of transferring to her new home at Fort Benning, Georgia. A pair of the developmental T29s can also be found at Fort Knox, Kentucky - one at the front of Marshall Bay and the other at the front of the Patton Museum. The T30 can be found at Fort Knox as well, this in front of Marshall Hall.

In effect, all three of these oft-forgotten designs serve as a window to the past - where wartime experience ushered in an age of creative thinking to seemingly impossible problems considering warfare. Despite their "failure" in the real world, these super heavy tanks should not be viewed as follies but instead serve to promote the ingenuity inherent in those involved in a true global life-and-death struggle that only a remaining few today will ever understand.

against any other in our database)