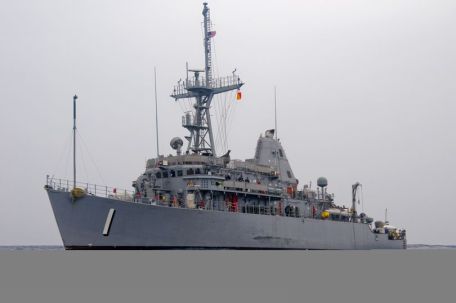 Her outward appearance is characterized by a tripod main mast situated forward on the design and an enclosed funnel structure at center. Her bridge is settled into the upper superstructure just behind the bow while the stern is situated well low with a stepped appearance. Propulsion for the Avenger is brought about through 4 x Waukesha Motors Company diesel engines. The engines rotate twin propellers that themselves offer reversible pitch action. Twin light-load electric motors are also provided as are two individual rudders. Top speed is listed at 14 knots.

The USS Avenger is optimally crewed by 81 personnel made up of 6 officers and 75 enlisted crewmembers. Her sensor systems consist of an AN/SSN-2 Precise Integrated Navigation System (PINS), and AN/SQQ-32 Mine Hunting Sonar system, an AN/SPS-55 Surface Radar and an AN/WSN-2 Gyro Compass.

Avenger's original home part was NS Charleston, South Carolina. She was deployed operationally to the Persian Gulf for Operation Desert Storm, earning herself and her crew the Combat Action Ribbon and the Navy Unit Commendation. By 1993, she was given her new homeport at Ingleside, Texas. Since then, she has seen deployment to the Atlantic, Mediterranean and the Pacific.

The USS Avenger was first ordered on June 29th, 1982 and laid down by Peterson Shipbuilders on June 3, 1983. The ship was launched on June 15th, 1985 and officially commissioned on September 12th, 1987. She makes her homeport at Ingleside, Texas and fights under the motto "Dux et Defensor Semitae" meaning "Guide and Defender of the Pathway". As of this writing, the vessel was in active service with the United States Active Naval Reserve Force, Mine Countermeasures Squadron 2 of the US Atlantic Fleet.