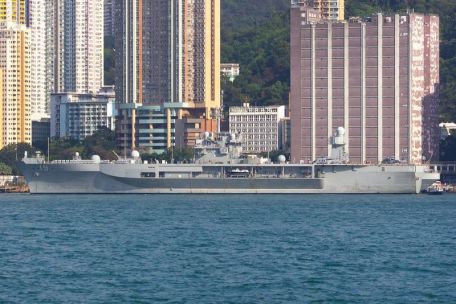 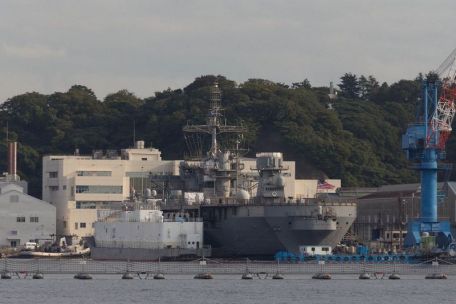 USS Blue Ridge (LCC-19) serves the United States Navy (USN) in the command ship role. She represents the lead-ship of the two-strong Blue Ridge-class developed during the 1960s. Named after the Blue Ridge Mountings of Appalachians, the class is used to support USN fleet actions through "Command, Control, Communications, Computers, and Intelligence" (known through its short-form "C4I"). USS Blue Ridge, despite her Cold War-era origins, continues to serve the USN fleet today and fights under the motto of "Finest of the Fleet".

USS Blue Ridge (LCC-19) was ordered on December 31st, 1964 and saw her keel laid down by the Philadelphia Naval Shipyard on February 27th, 1967. The vessel was launched to sea on January 4th, 1969 and was formally commissioned on November 14th, 1970. She homeports out of Yokosuka, Japan and, through modernization and general maintenance, is expected to serve the American fleet into the 2030s.

The ship has a displacement of 19,610 tons and an overall length of 634 feet with a beam measuring 108 feet and a draught down to 28.9 feet. Power is from 2 x Boiler units feeding a single geared-steam turbine driving a single propeller shaft under stern. Aboard is an operating crew of 842 which can be increased to over 1,440 with a complete complement of command staff and enlisted personnel. Armament is self-defensive in nature, comprised of 2 x 20mm Phalanx Close-In Weapon Systems (CIWSs), 2 x 25mm "Bushmaster" chain guns, and up to 8 x 12.7mm Browning air-cooled heavy machine guns. The warship also carries the Mark 36 SRBOC chaff rocket system as well as 2 x Sikorsky SH-60 "Seahawk" navalized helicopters. The latter are launched and retrieved via the stern-based helipad.

The ship has a unique profile with its centralized bridge superstructure followed by a stand-alone, radar-equipped tower further aft. Helicopters are seated along the aft-section of the top deck and the various defensive armament systems dot the structure from bow to stern. A single exposed mastwork is seated over the bridge superstructure.

Since commissioning, the Blue Ridge has been a constant figure in American actions overseas, both in war time and in peace time. It was present during the Vietnam War (1955-1975) and managed an active existence during the tumultuous 1980s, seeing the collapse of the Soviet Union in the process. She took over flagship duties from USS Oklahoma City (CL-91) in December of 1979. Since then, the warship has participated in numerous training, humanitarian, and fleet support actions for her time at sea. Most recently, she was stationed in support of Japan following the events of the 201 Tohoku earthquake and tsunami.

Up to 2 x Sikorsky SH-60 Seahawk or similar helicopters.