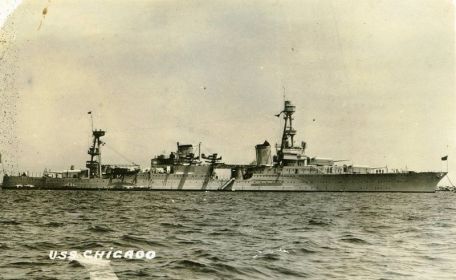 The Northampton-class cruisers were born as a six-strong group during the decade following the close of World War 1 (1914-1918). It superseded the outgoing Pensacola-class which were limited in their design (10,000 tons maximum) by the Washington Naval Treaty of the early 1920s. While USS Northampton (CA-26) became the lead ship of the emerging group, USS Chicago (CA-29) was one of her notable sisters. She originally carried the pennant number of "CL-29" prior to reclassification in 1931 to CA-29 to conform with the requirements of the London Naval Treaty.

USS Chicago was ordered on December 18th, 1924 and saw her keel laid down by Mare Island Naval Shipyard of California on September 10th, 1928. She was officially launched on April 10th, 1930 given the namesake of the city of Chicago, Illinois - the second United States warship to hold the name.

The warship showcased a running length of 600 feet, a beam of 66 feet and a draught of over 16 feet. Power was through a boiler-steam turbine arrangement encompassing 8 x White-Forster boilers feeding 4 x Parsons reduction steam turbines driving 4 x shafts under stern. Maximum speed in ideal conditions could reach over 32.5 knots and range was out to 12,000 miles. A typical crew complement was 691 personnel led by 90 officers. Armor protection measured up to 3.75 inches at the belt, 2.5 inches at the primary turrets and 1.25 inches along the conning tower.

Armament, the heart of any warship of the period, was led by a primary battery of 9 x 8" guns held in three triple-gunned turrets arranged as two forward and one rear emplacement. Only during broadsides could the full power of this armament be brought to bear. Anti-Aircraft (AA) support was through 4 x 5" guns and there were also 2 x 3-pounder cannons carried for saluting purposes. The vessel was equipped with six total torpedo tubes of 21" diameter.

USS Chicago carried as many as four Curtiss SOC Seagull floatplane biplanes for reconnaissance, scouting and artillery direction purposes. These were launched via a pair of catapults featured at midships and recovered by way of onboard crane.

She set sail from Mare Island in July of 1931and participated in Fleet Problem XIII in 1942, remaining in Pacific waters for the foreseeable future. A 1933 collision in full fog with a British cargo vessel (SS Silver Palm) cost the lives of three crew. 1934 saw USS Chicago in Caribbean waters for group exercises after which she made her way to New York for review. Traversing through the Panama Canal, USS Chicago then made port at San Pedro, California where, in 1940, she received RCA CXAM radar. After September the ship was reassigned to Pearl Harbor, Hawaii.

Fortunately for the vessel and crew, USS Chicago was away with Task Force 12 (TF12) during the Japanese surprise attack on the Harbor on December 7th, 1941 - marking America's formal entry into World War 2. She was immediately placed into combat readiness and took on several patrols meant to locate and engage the departing enemy fleet though these actions proved fruitless. In February she joined ANZAC at Suva Bay and was part of the force providing cover fire at New Guinea and New Caledonia. Her guns were also brought to bear against enemy positions at Tulagi of the Solomon Islands campaign (Battle of Coral Sea) and was strafed by Japanese warplanes in May. That same month a Japanese "midget submarine" attempted a night-time attack on Chicago as she lay in Sydney Harbor, Australia. Two torpedoes were fired at her - one missed while the other failed to explode.

USS Chicago formed part of the force covering the Allied landings at Guadalcanal in August and took part in the Battle of Savo Island soon after. She took a torpedo hit during the fracas but recorded little damage. Light repairs were enacted at Noumea until more in-depth work was undertaken at San Francisco. Before the end of 1942, Chicago had her armament suite updated to include 16 x 28mm AA guns and 28 x 20mm Oerlikon AA guns to help improve her ability to repel incoming aerial attacks. Of note is that she lost her torpedo tubes.

With the required work completed, USS Chicago sailed from San Francisco in January 1943 and her subsequent voyage took her to Noumea before heading to Guadalcanal as a convoy escort. The group fell under attack from above and below and Chicago took two torpedoes into her side which caused power to be disrupted and flooding to occur. The listing vessel was controlled by a timely crew response which saved her from a worse fate. She was, again, struck by four more Japanese torpedoes which proved to be her death knell for the crippled ship sank on January 30th, 1943 during what came to be known as the "Battle of Rennell Island".