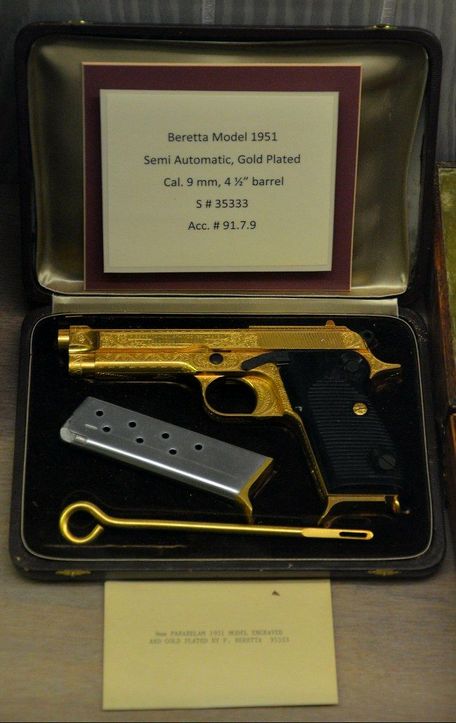 Following the end of World War 2 (1939-1945), Beretta SpA saw fit to fulfill the market need for a 9x19mm Parabellum semi-automatic type pistol. Design work ultimately led to the Model 1951 being introduced by the company with attribution given to Tullio Marengoni and production spanned from 1949 until 1980. Variants formed from the design included the Egyptian "Helwan", the Brigadier civlian market form, and several specialized models in 7.65x21mm Parabellum chambering.

The Model 1951 was unique to Beretta in that it was the company's first pistol to feature a locked-breech design (as opposed to earlier marks that relied on a blowback system of operation). A short-recoil action was used and feeding (9x19mm) was by way of an 8-round detachable box magazine inserted into the base of the grip. The slide took up much of the upper section of the pistol and held the forward and aft sighting devices. As in other Beretta pistols, the barrel's muzzle protruded a short distance ahead of the slide.

Initial production batches were completed with alloy frames but this was succeeded by a steel-framed form due to the former's resiliency when firing the 9x19mm cartridge. While heavier, the steel-framed pistols proved the better choice for long-term durability. A third batch appeared and these were given longer slides for better balance.. These appeared in 1955.

Out of production today (2017), the series is only rarely encountered as it is also out of service with many of the original operators.

The Model 951R became a selective-fire offshoot of the Model 1951 and this "machine pistol" was developed with Italian special forces in mind. The basic design form of the pistol remained but the action was made to allow for automatic fire (as well as single-shot fire) from a 10-round detachable box magazine. A wooden foregrip was added under the muzzle to support a two-hand hold - particularly useful when firing in full-automatic. The slide was made heavier to compensate for climb and improved balance as well. In practice, this gun was far from useful as it held a restrictive ammunition count and proved relatively uncontrollable under full-automatic fire - which resulted in poor accuracy. Rate-of-fire reached between 1,000 and 1,200 rounds-per-minute.